17 Mar Dhruv Baker will be joining Festival of Food & Drink

Posted at 08:44h in Festival of Food & Drink by Channell Events

Announcing our first guest for 2016! Dhruv Baker will be joining us at Clumber Park on Saturday 17th September.

Dhruv loves all aspects of cooking but his love of spices and using them in ways one wouldn’t expect, has become his trademark. Since winning MasterChef, he has worked at Le Gavroche, De Librije in Holland, Benares, The Kitchin and Helene Darroze at the Connaught.

His first book, SPICE, was published by Orion Publishing in July 2014. In addition to writing his book, Dhruv is also a regular contributor for Waitrose Kitchen and Waitrose Weekend, as well as several other major food titles. He presents for Waitrose TV and has also been a guest chef on Channel 4’s Weekend Kitchen with Waitrose, What’s Cooking? and the new Food Network series, The Big Eat.

In 2014, Dhruv also set up his events company, Earlsfield Kitchen and became Chef Proprietor at his pub in South West London. 2016 sees him working on an exciting new television project, continuing to work as a brand ambassador and writing.

His first book, SPICE will be available to buy at the Festival, Get Dhruv to sign your copy!

Festival of Food & Drink Tickets are the perfect Gift for Mothers Day! At just £6 in advance +transaction fee (per booking).  You will also save £7 on parking! What are you waiting for? 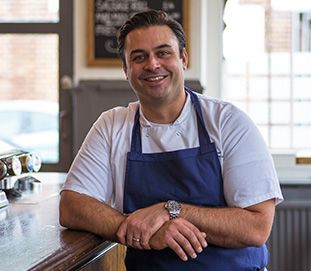